The new church for Iraqi Christian refugees is dedicated !

ACTION – Funded thanks to your donations, and built in less than three months, the new Sayedat el Bichara church (Our Lady of the Annunciation) for the refugees of Ashti camp, in Erbil, was officially dedicated on November 5.

In the afternoon of November 5, surrounded by a joyful crowd, Mgr. Petros Mouche, Archbishop of Mosul and Qaraqosh, living in exile in Erbil since ISIS’ offensive, cut the green ribbon that celebrated the official end of construction work and the dedication of the new church, Our Lady of the Annunciation, in the big Christian refugee camp of Ashti. 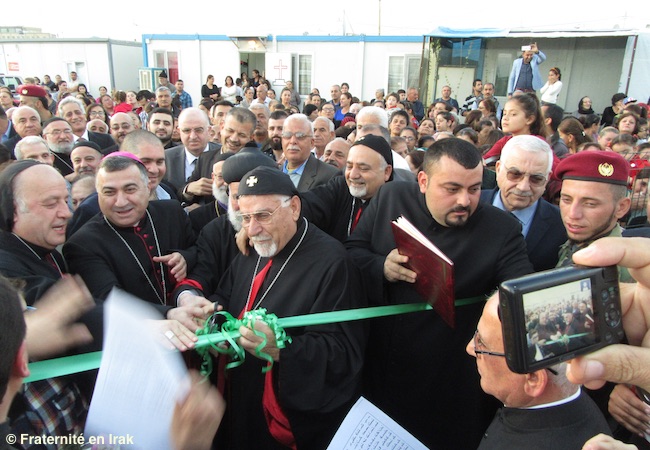 Hundreds of people rushed to discover the new building, funded and built in record time to give the 7,000 inhabitants of the camp a decent place to live their faith and gather. While the camp choir’s songs filled the brand new church, one thousand of believers took their seats, soon filling the aisles and any remaining space. 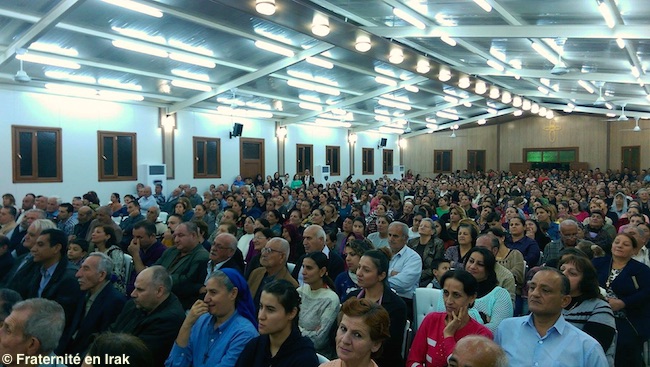 In his sermon, Mgr. Petros Mouche, who initiated the project, reminded his congregation of the courage it took to leave everything. “Evil, embodied by ISIS, tried to weaken your faith, tear down your morals, destroy your relationship to God and to your Church, but you chose to lose everything, your houses, your estates, your jobs, rather than your faith. And here you are today, in a new church. As soon as the Brotherhood with Iraq heard about the project, it came to offer support. And you, despite your challenging life conditions, you all brought something.” 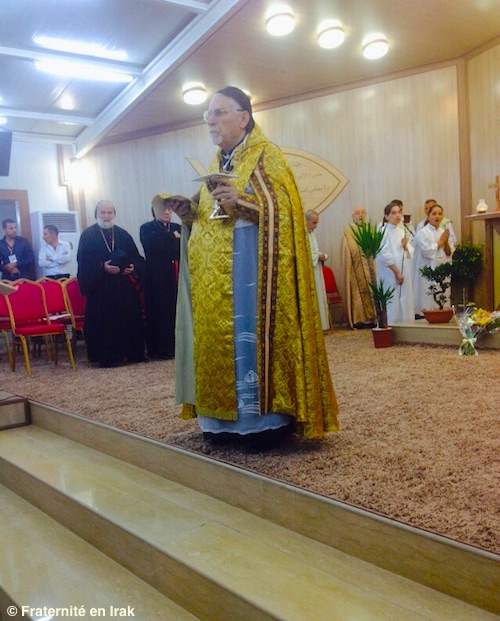 “Today is a day of celebration, adds Father Emmanuel, vicar of the new church and manager of Ashti camp, that counts 1,500 trailer homes housing close to 7,000 people. He chose to dedicate the church under the patronage of Our Lady of the Annunciation, like his former parish in Mosul. This new church is a great joy, because it shows that we have kept our greatest treasure, our faith.” 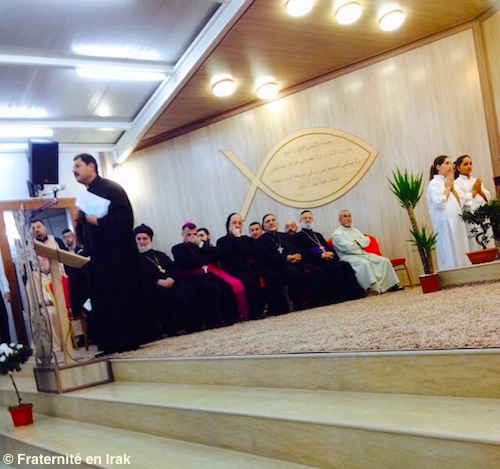 Rodolphe Begue, Secretary General of the Brotherhood with Iraq, also took the floor. “Five years ago almost to the day, the attack against Bagdad Cathedral led us to create the Brotherhood with Iraq. Five years later, our friendship has grown. We tried to help you through this terrible exodus with everything we had, and it is a great joy for us all to be able to stand here with you today, in this new church, even if it is in a refugee camp. In Iraq, a church was raised skyward. At its heart, your prayers will unite with ours so that your villages are freed.” 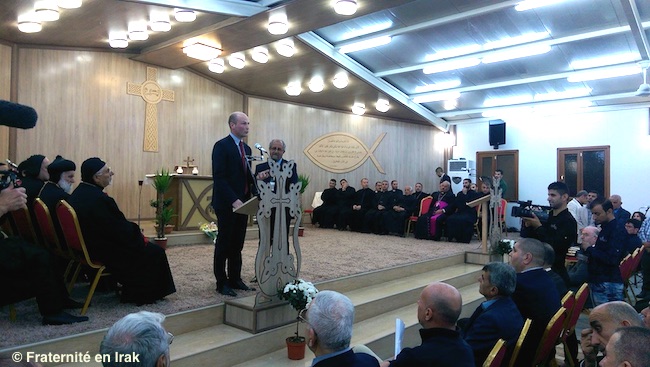 After the Mass, Mariam, a young woman from Mosul, explains with emotion: “Before ISIS arrived, when I lived in Mosul, I used to take part in many activities at the church that carries the same name as this new church, Sayedat el Bichara… Today, I felt the same way I felt in Mosul, it is as if I am home again! I will come often, for sure, because the church is welcoming and my home is nearby in the camp.”

Sabath, in his sixties, also says with pride: “We are very moved. Today, we all forgot that we are refugees. The scriptures say that when two or three people gather, He is here among them. When there are a thousand of people, and our French brothers are with us, how would we not feel His presence in our hearts?” 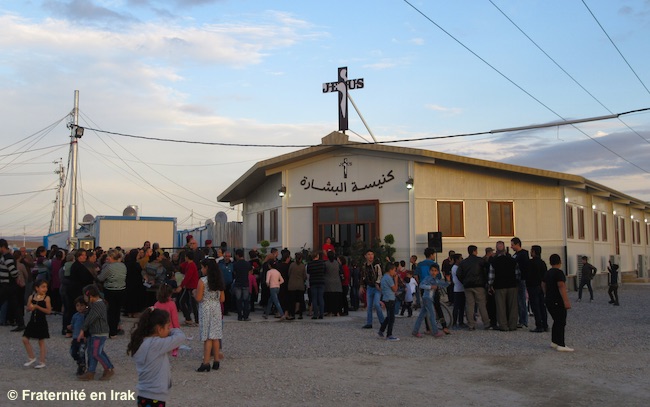 A project carried by the refugees

In July, when Mrs. Petros Mouche asked volunteers of the Brotherhood with Iraq to fund and manage the construction of a church in the center of a big camp for displaced people in Erbil, it sounded a bit like a far-fetched dream. But the exodus had been ongoing for more than a year, and the front line wasn’t moving in the Nineveh plain, so it became essential. “There was a need for a place where Christians could remain themselves, living their faith in this camp, but also for a place where the entire community could gather to discus and meet — in short, a place where there would be no refugees, only human beings whose dignity remained untouched despite ISIS”, explains Faraj Benoit Camurat, President of the Brotherhood with Iraq.

French donors were up to it. In less than three months, 90,000 euros were raised among hundreds of private individuals. The construction work started on August 15. On the Iraqi side, 45 workers, all displaced people from the camp, worked in shifts. The metal-framed structure soon rose, and the work site maintained a steady pace under the supervision of Monther, a loyal friend of the Brotherhood with Iraq and a wonderful site manager. At the end of October, less than three months after the beginning of the construction work, the site only needed a good sweep-up and minor finishing touches. 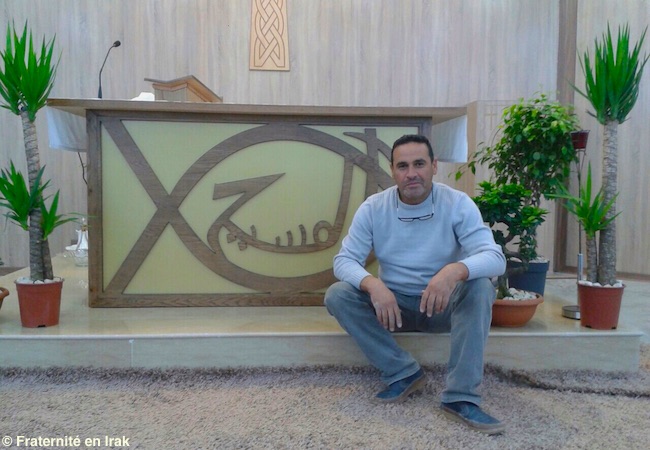 Pictures – The construction of the church, step by step.

“This church is a symbol of resurgence and hope for all Christians in Iraq, feels Faraj Benoit Camurat, President of the Brotherhood with Iraq. Although some predicted their end, they are showing to the world that they are alive, and that they want to continue to live at home, in their country.”

A heartfelt thanks to the generous donors of the Brotherhood with Iraq, who made this church a reality, in record time. We need you to continue to support major projects!