ACTION – Funded and built by the Brotherhood with Iraq, this bakery provides work to bakers of the Nineveh plain who were chased from their homes by ISIS. Bread is offered at a discounted price for all displaced people.

It only took a few weeks to build and open a bakery between Ashti camp and Werenfried camp in Erbil, the capital of Iraqi Kurdistan. Early April, during the Holy Week, a first team from the Brotherhood with Iraq decided on the location and gathered the technical skills needed to build the structure. The bread oven was ordered and came from Souleymania, a city located north-east from Erbil. Concrete was poured and consolidated soon after. 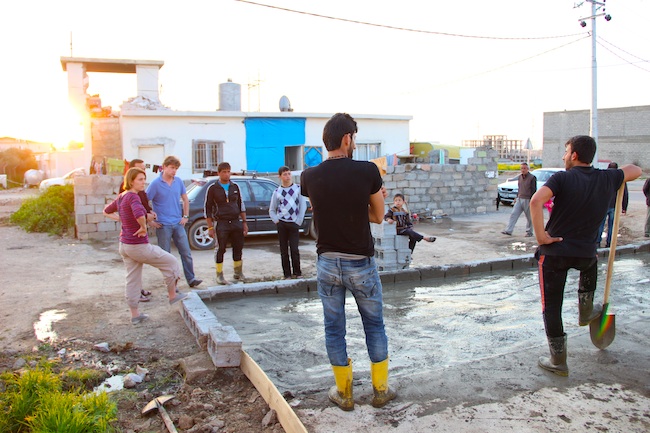 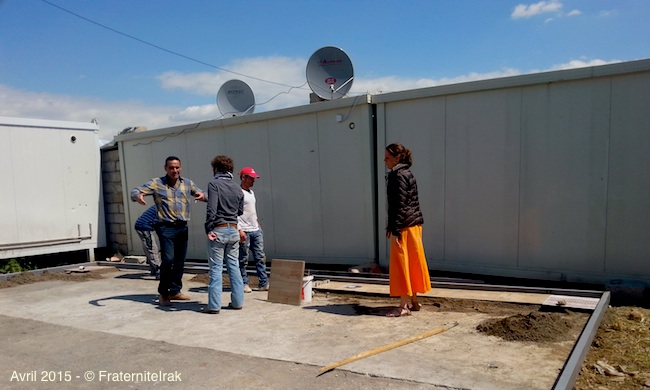 At the end of April, a second team from the Brotherhood with Iraq took over to complete the project. The bakery’s blueprints were designed so that the entire workshop can be disassembled and conveyed. Thus, not only will displaced populations be able to bring the bread oven back home, but also the entire structure of the bakery.

Everyone took part in the project. A Kurdish company built the structure together with refugees. To help keep the cost down, some materials were taken from the Ankawa Mall, an abandoned shopping center where hundreds of displaced people lived for several months. The Brotherhood with Iraq had refurbished two floors of this makeshift camp, including putting up dividing walls to preserve families’ intimacy. 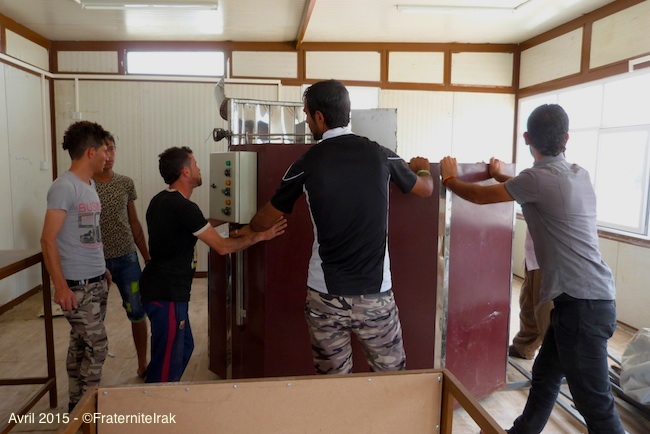 People who lived at Ankawa Mall have now been transferred to Ashti camp, and the dividing walls have been recycled to build the bakery. The association only had to purchase the roof and the windows. Inside the bakery, all furniture and work surfaces were built by two refugees from Qaraqosh, David and Rassa, who used to work as welders before ISIS chased them from their home. 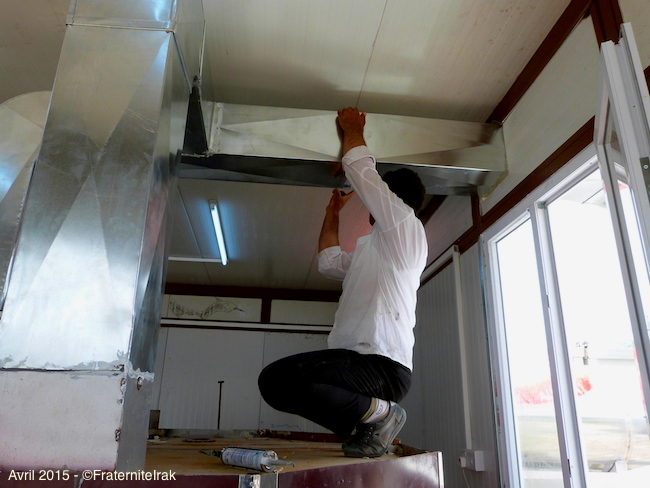 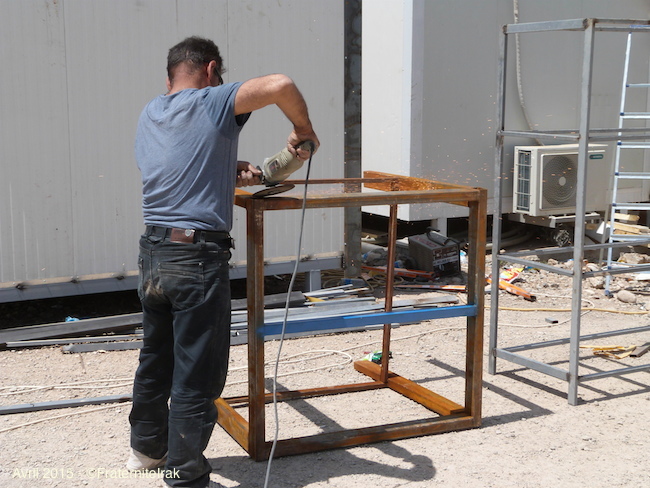 Five bakers have started to work in the bakery, opened since May 4. Shand, the team manager, is from Qaraqosh, in the Nineveh plain, and now lives in Kaznazan, a center for displaced people at the Erbil border. Steven, Behnam and Rassa are also from Qaraqosh and now live at Ashti camp, a few yards away from the bakery. Last, Muchtak comes from Bartalla, another village in the Nineveh plain; he also lives at Ashti camp. 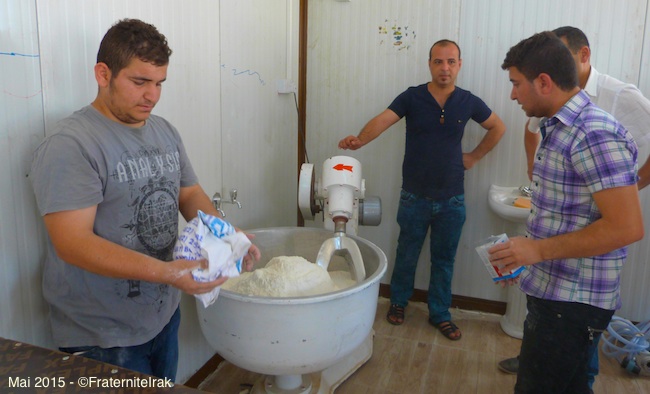 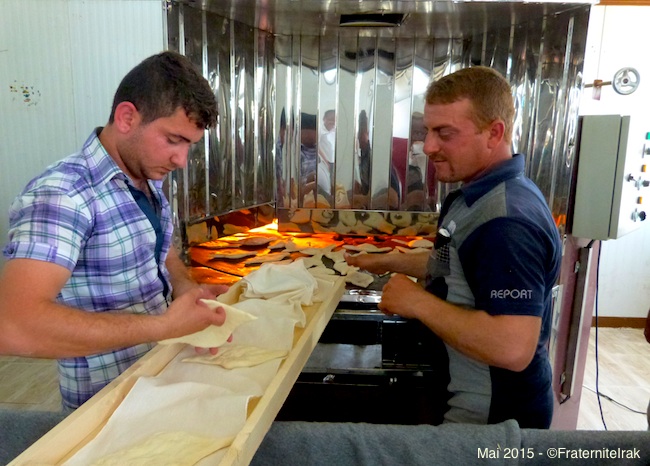 The bread oven is on – © Fraternité en Irak

“I felt these men were happy to find themselves back in a work atmosphere, to have been trusted with this important responsibility towards their refugee friends, tells Marie, one of the team members of the Brotherhood with Iraq who completed the project. They are very proud of this new bakery and they aren’t the only ones! The first round of samoun, the local diamond-shaped bread, was quite an event. People rushed at the windows to witness it! There was a lot of joy, this event gave them the opportunity to escape their everyday life for a few hours.” 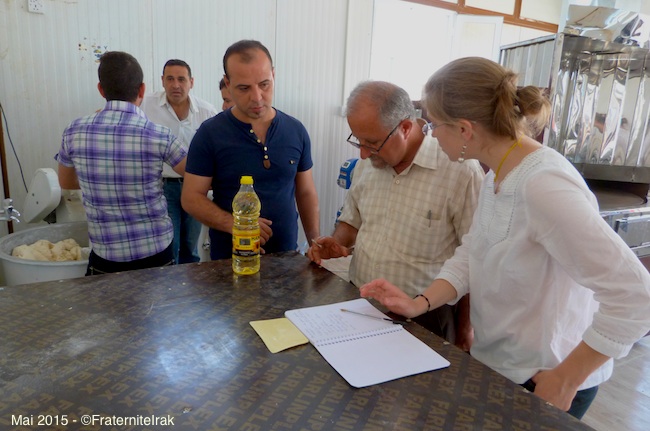 Final preparations before the opening. Marie, a member of the Brotherhood with Iraq, reviews the final steps with the bakers. 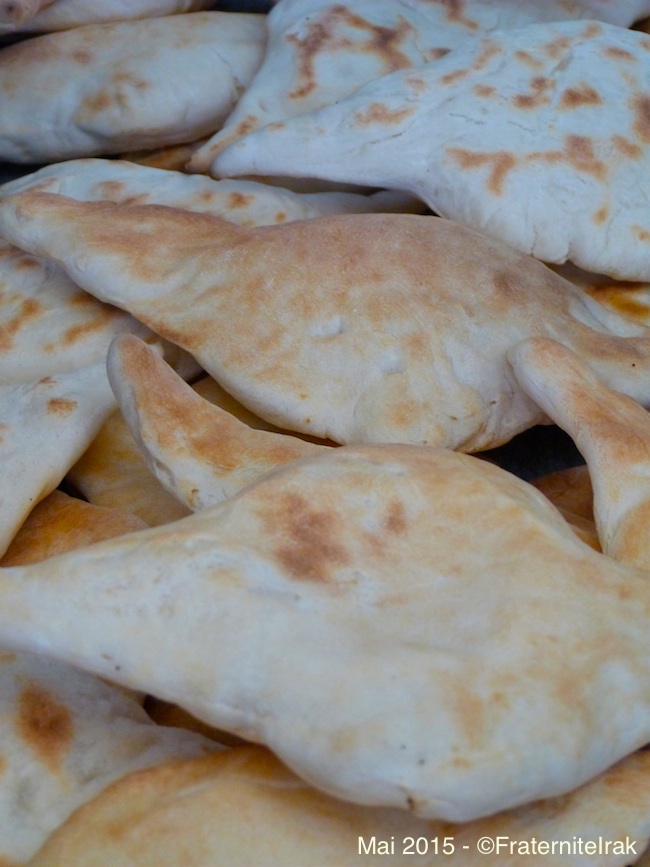 The first diamond-shaped breads, called “samoun”, fresh from the oven 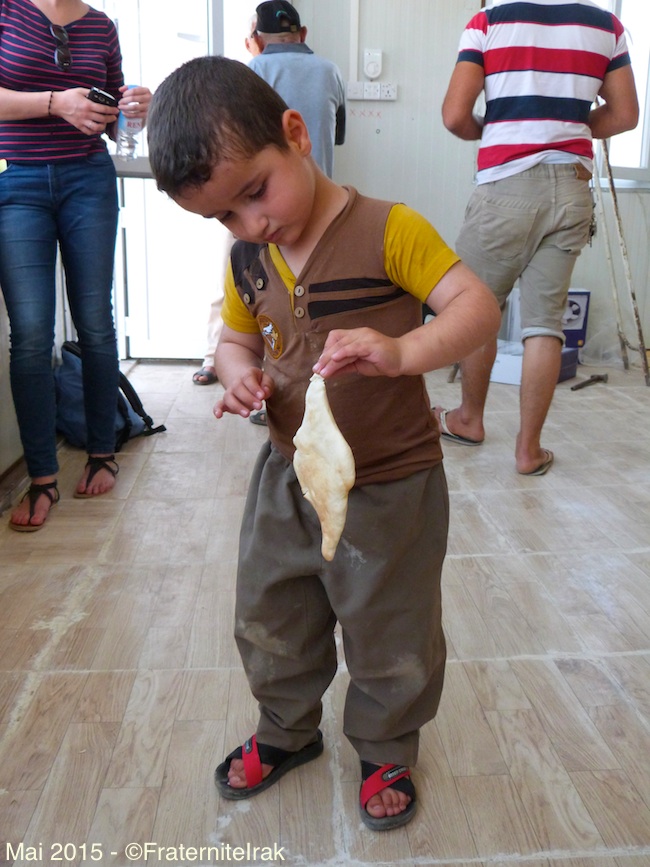 After a first free round to make the new bakery known around, sales started two weeks ago. The first numbers are encouraging and for good reason: here, the bread is cheaper than in any other bakery in Erbil. The bakery is also closer to everyone’s living quarters. Even the elderly or the young children can come to buy their bread! A win-win model that the customers seem to enjoy… 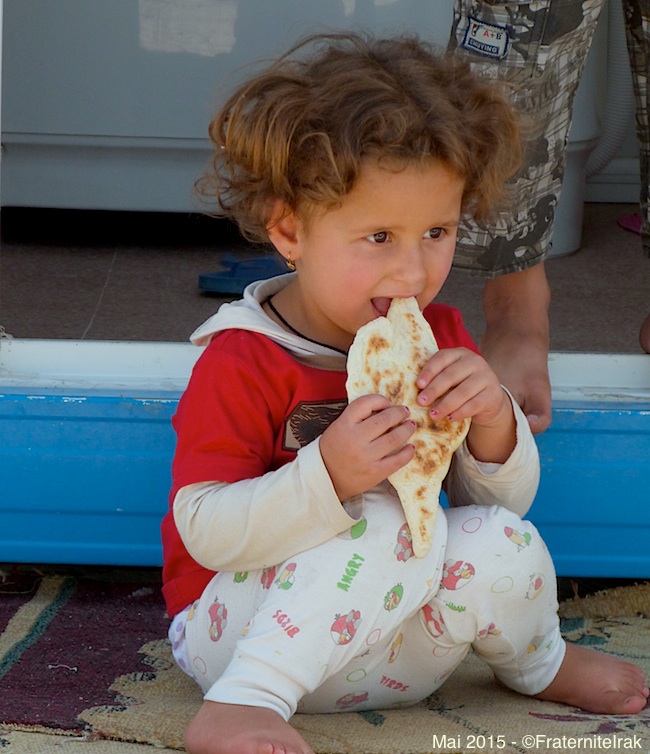 Free round for the first batch 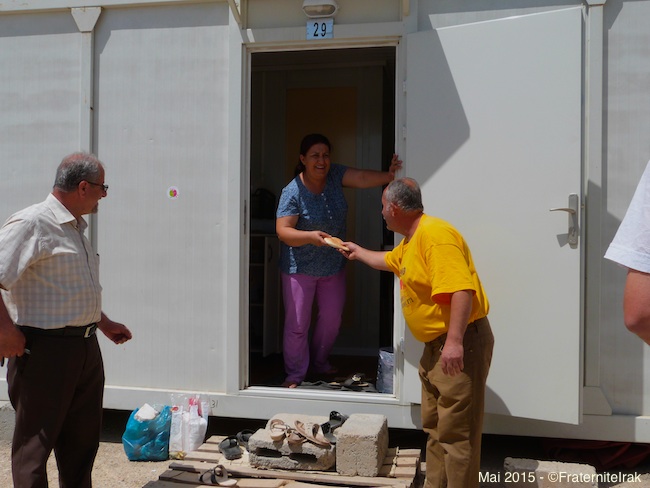 Free round for the first batch

“This bakery serves three purposes, underlines Faraj Benoit Camurat, President of the Brotherhood with Iraq. The first one, of course, is to provide quality bread to displaced populations on a daily basis. The second is to create five baker positions. But the most important for us is to rebuild refugees’ self-confidence, here in Ashti camp. By buying this bread made by their own bakers, they no longer depend on humanitarian aid and recover their dignity.” 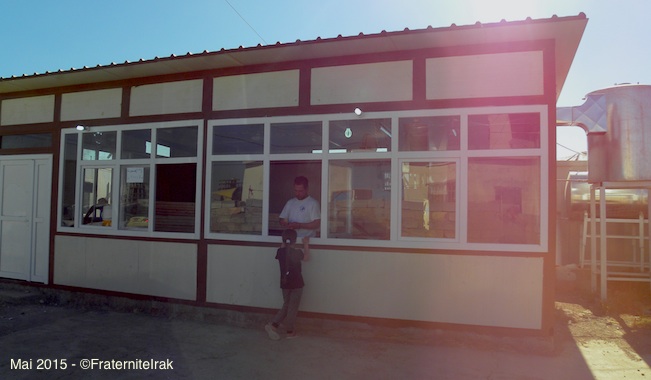 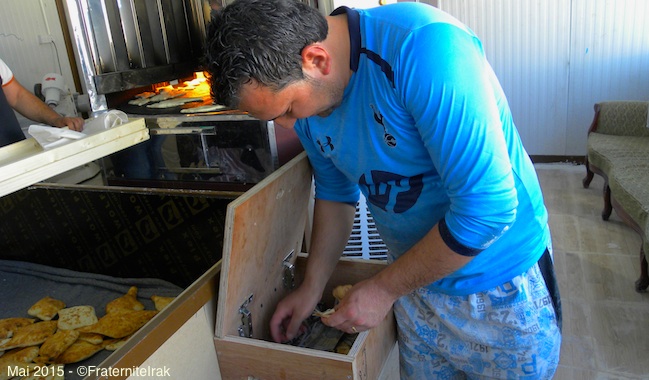 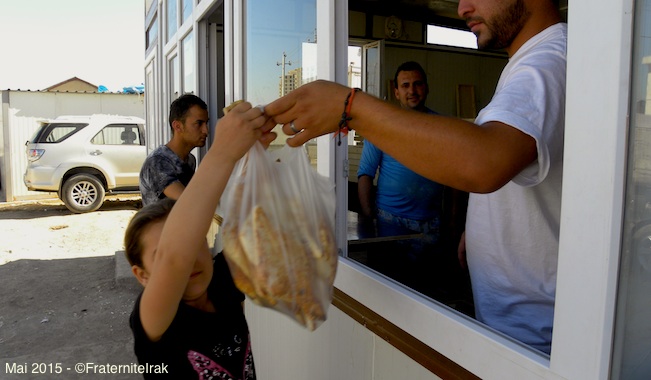 Young and old alike come to buy their bread 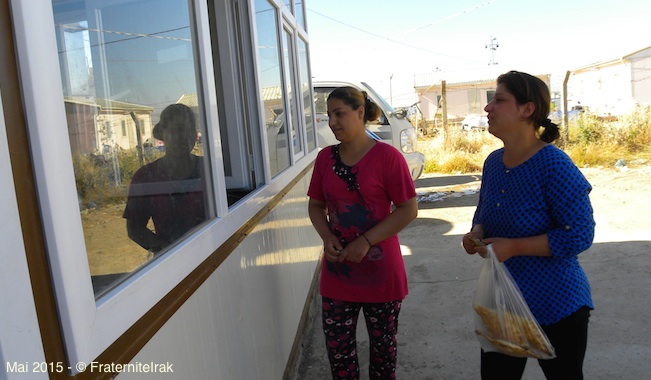 The bakery is also a meeting place!

The Brotherhood with Iraq will provide financial support to the bakery during its start-up phase. It will then be entirely managed by displaced people, for displaced populations.

We would like to thank the generous donors who provide sustainable support to the Brotherhood with Iraq, and by doing so, who enable the association to complete ambitious projects. We need your help to continue!