With the mine-clearing experts in the Niniveh plain

EXCLUSIVE – For more than a month, mine-clearing experts from the MAG NGO (Mine Advisory Group), commissioned by Fraternity in Iraq, have been working every day to locate, signal, clear and destroy landmines and explosive traps set by ISIS in the Niniveh plain. This was made possible thanks to your generosity. We followed them on the field. 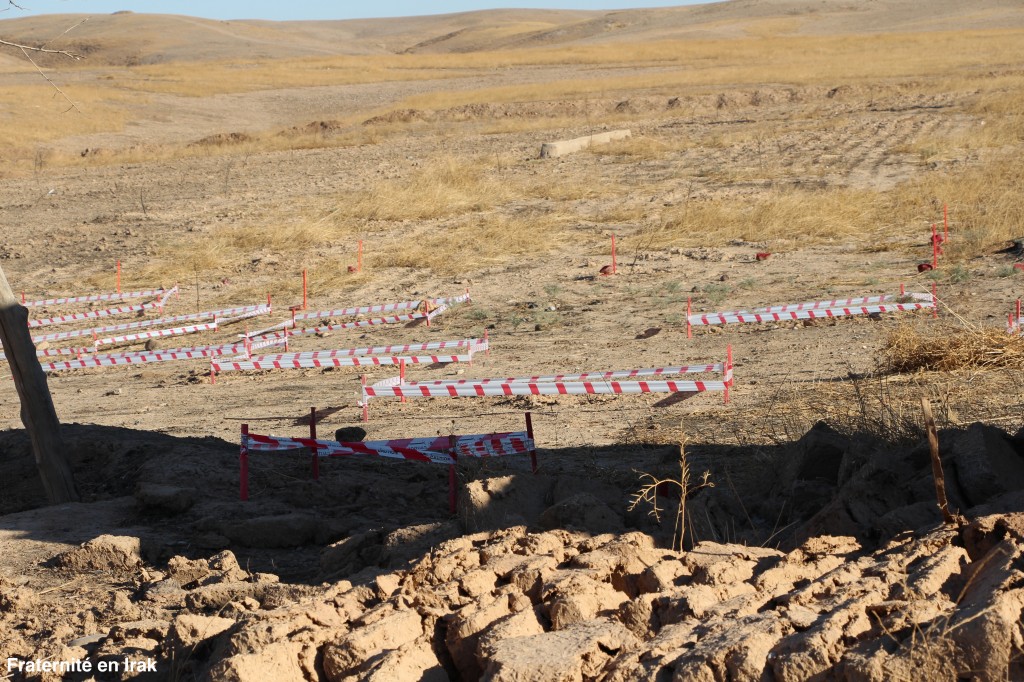 Each red and white ribbon square marks a landmine: mine-clearing has started in this field located between the houses and the school

In the Niniveh plain, in a small Kakai village freed from ISIS in May 2016, a mine-clearing expert comes and goes, listening carefully to his metal detector. Today, his work is to locate the landmines around the local school, and on the path to it. “Here, ISIS set the landmines to detonate with a 7-lb pressure only, he explains. It’s clear that the jihadists haven’t trapped the school surroundings for military reasons, but to kill children.” Witnessing such cruel intentions turns our blood to ice. Slightly disillusioned, the expert shows us the hill behind the school: “Do you see this area? We thought there were only two rows of landmines, but after we started using detectors, we realized that there were actually five rows.” 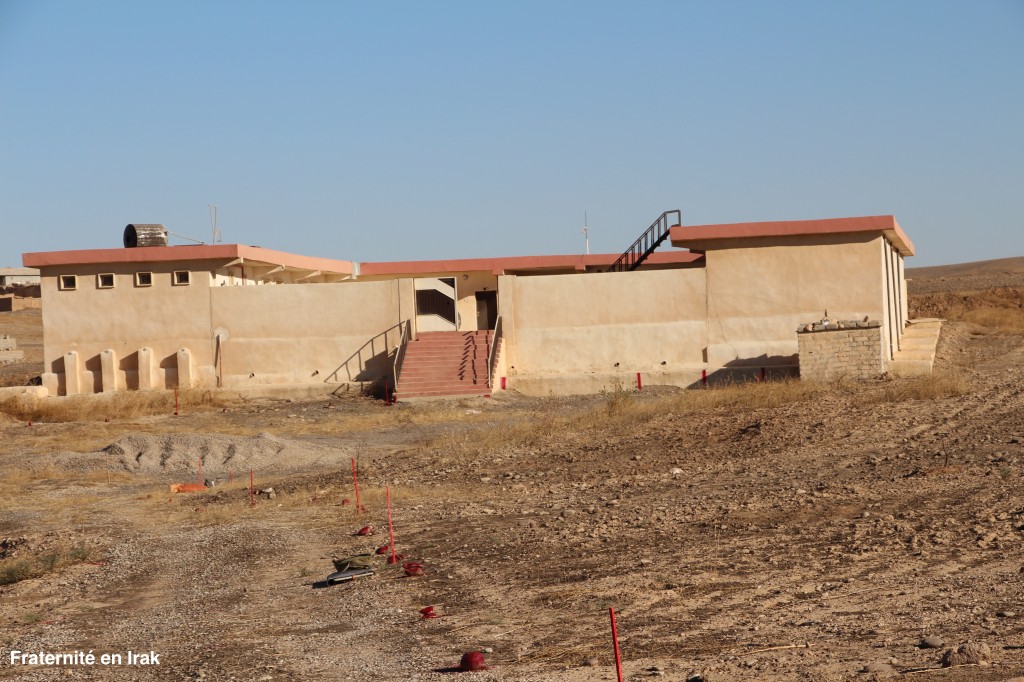 On the path leading to the school, ISIS set landmines to be triggered with as a little as a 7-lb pressure

Before starting this meticulous mine-clearing effort, the MAG teams, commissioned by Fraternity in Iraq to clean this first village, have conducted a long and systematic scouting. This is a martyr-village: here, eleven villagers lost their lives while returning home, and three Peshmerga died trying to clear the mines. A red and yellow staff, stuck in a small crater, shows the location of a recently-detonated landmine which killed a man. The mine-clearing teams operate in several areas of the village. Each unit works in a set perimeter: the village entrance, the school area, the pumping station… 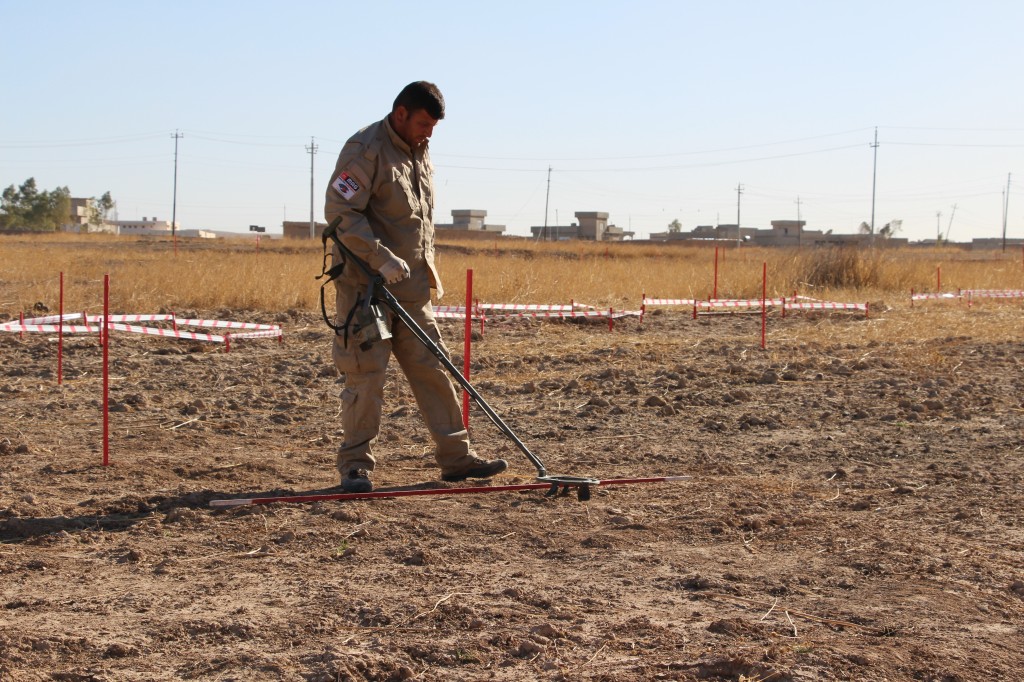 A mine-clearing expert at work. The red sticks demarcate his work area

The cleaning is done very methodically: first, all paths, then building surroundings, crop fields, and finally inside the houses. This would be less complicated if some families hadn’t come home already, or hadn’t been checking on their houses. In front of the house where two cousins died while trying to return home, small yellow and red ribbon perimeters indicate the presence of landmines. The inside of the house hasn’t been cleared yet, and according to the experts, it’s likely it is trapped too. 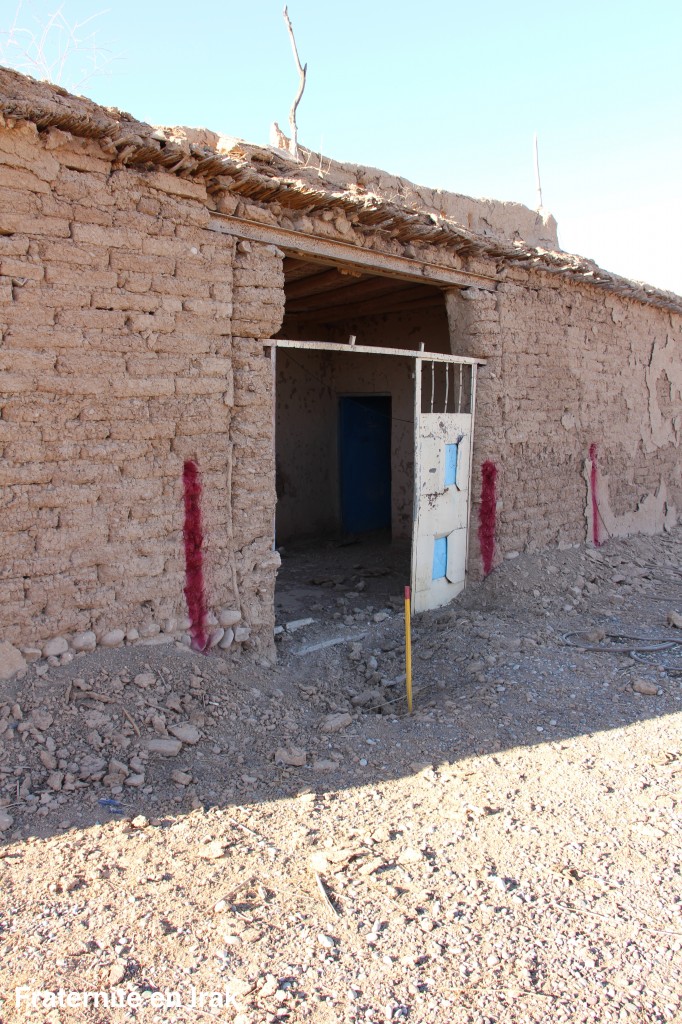 The yellow stick stuck in the small crater shows that a mine recently detonated here. It killed an inhabitant of this house who was trying to return home. According to the mine-clearing experts, it is very likely that the inside of this house has been trapped. Intent: that no one ever returns.)

The teams regularly remind us of security rules. “Don’t touch any object, and only walk between the sticks, behind us!” To avoid accidents, the unit leader orders to stop all mine-clearing work while we cross the mine field. Clear signs of the risks these experts take: a stretcher is always nearby, and a first-response team is always ready to intervene in case of an accident. How could we not admire those men who risk their lives to save others’? A mine-clearing expert explains: “You know, I don’t do this job for the money I earn at the end of the month. I do it because I know that for each mine I remove, I may be saving several lives.”

You can read : Emergency for mine clearance of the Niniveh plain !

All removed landmines are lined up against a wall and organized by category. The operation manager, Salam, shows us how, with time, ISIS has improved its landmines, which are more and more sophisticated. But where do they come from? “These mines were designed and created in a former munitions factory in Mossul. They are copies of the VS 50, an Italian anti-personnel mine, except that ISIS made it a hundred times bigger, strong enough to go through a vehicle from floor to roof”. Are the explosives also made in Mossul? “Yes. ISIS has created an industry that manufactures hand-crafted explosives.” 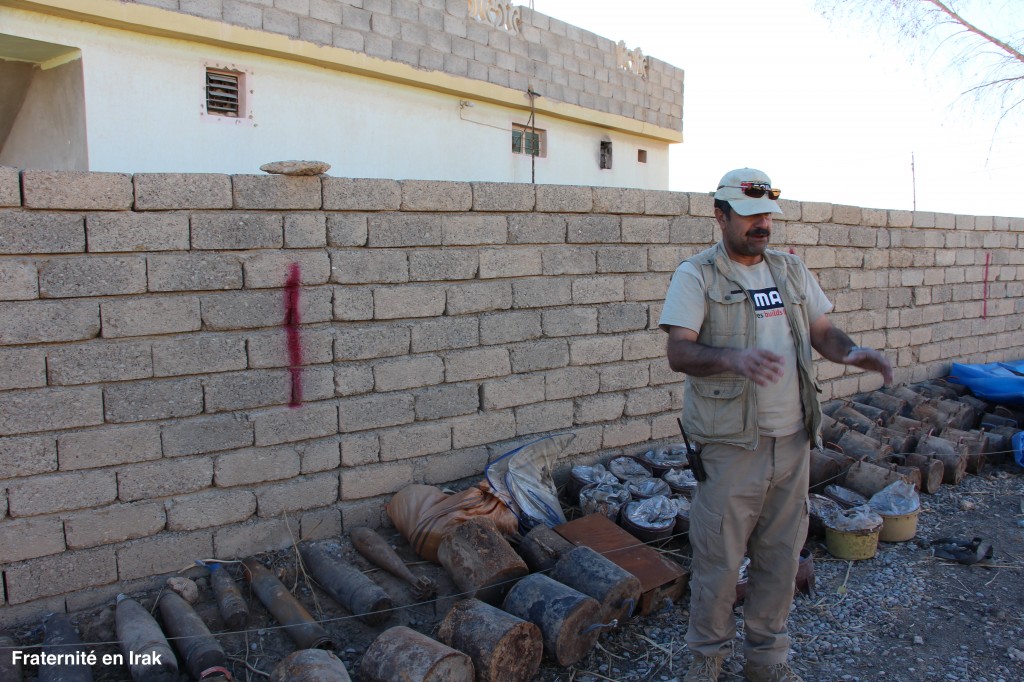 Lined up and organized by categories, these landmines are a display of ISIS’ cruelty, which industrialized their production

Educating and raising awareness among the population

Other teams are in charge of educating the population, explaining the risks associated with landmines. Experts visit families, where all ages are gathered to listen to a presentation complete with pictures. These meetings raise awareness and give very practical advices, such as reflexes that can save someone’s life: “If you suddenly realize that you’re walking on a mine field, squat and wait for a mine-clearing team to come and extract you”, explains a trainer. 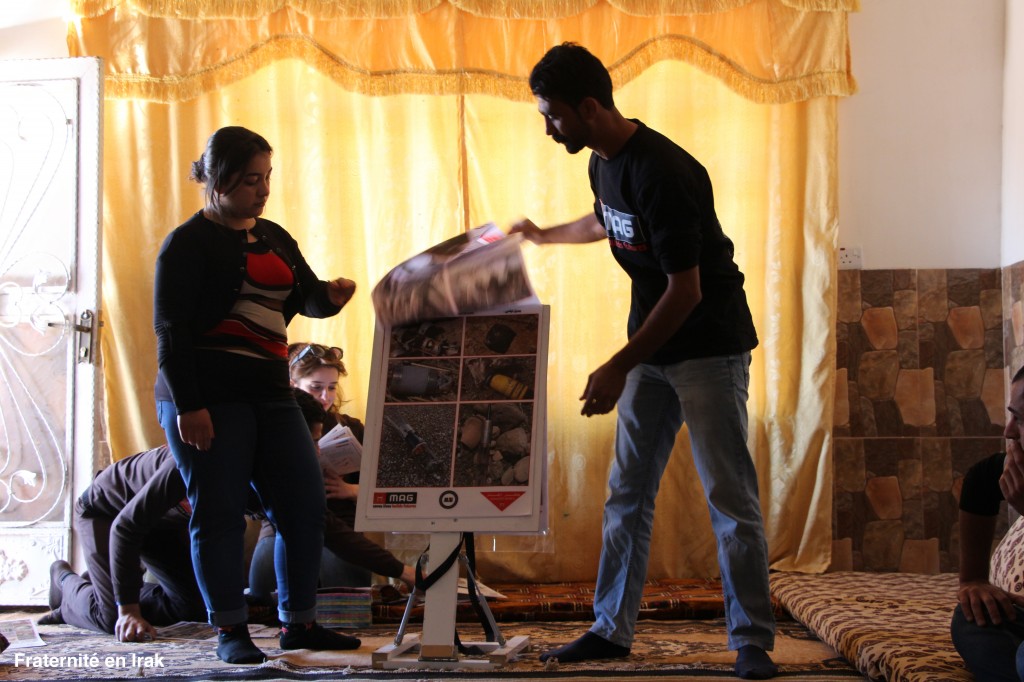 Awareness actions are led in villages to avoid more casualties

Down the hill, a huge field is being cleared as well; it counts dozens of plastic ribbon squares. This field is the unavoidable path to the local pumping station. We carefully follow the mine-clearing experts on a narrow walk. At the end of the path, we discover what is left of the pumping station, which used to bring life to all inhabitants of the village. Here again, we observe that ISIS has mined everything to prevent life from ever getting back to normal. On the left, the experts show us an area that has yet to be cleared: “Look at this black line on the ground, it’s a trigger. The wind and the rain have uncovered it. ISIS also mined the access to the bridge”. 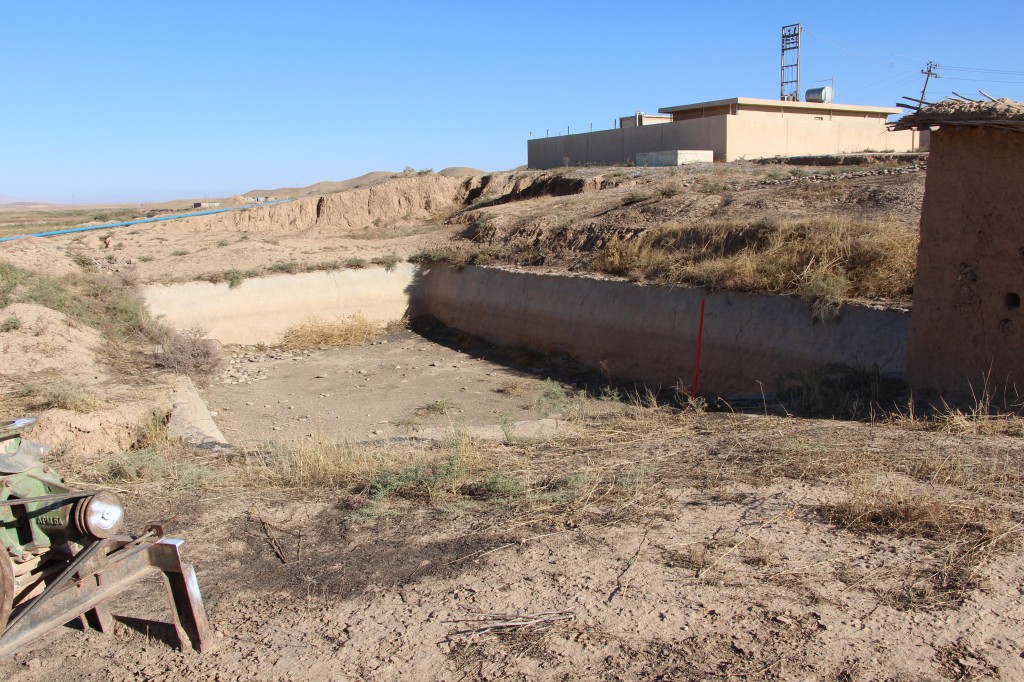 The pumping station is out of order. ISIS has mined all accesses to this vital area which used to provide the village with water 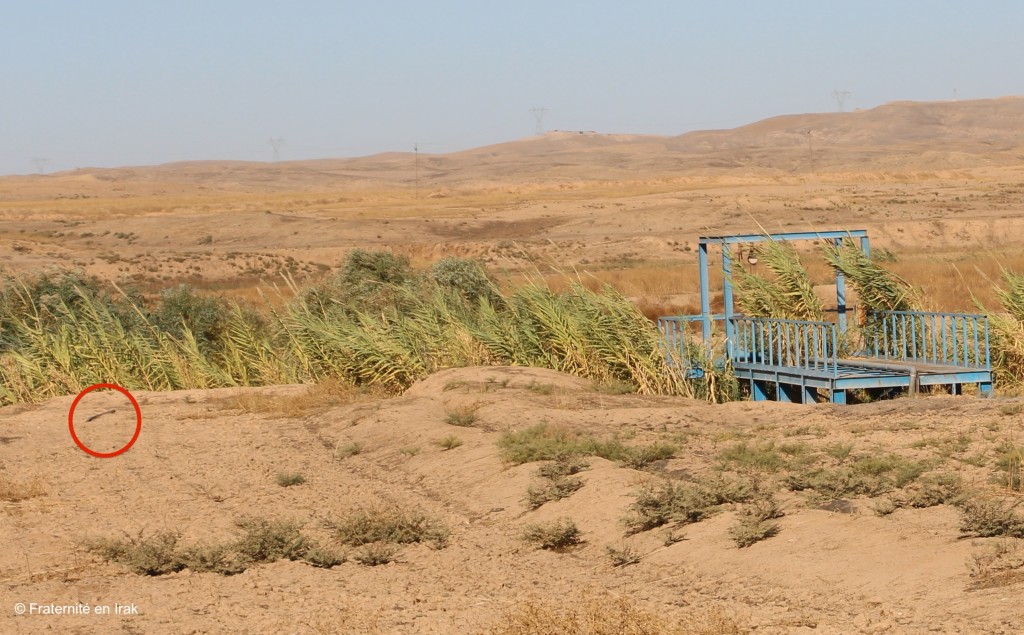 This black line is a landmine trigger, which the wind and rain have uncovered. ISIS also sealed off the bridge by mining its access

Within the mine-clearing teams, everyone has a very specific mission. Some are in charge of gathering requests and answering inhabitants’ questions. It isn’t a simple task: all would like to have their house or the walk bridge leading to their vegetable garden cleared first, or a big unexploded device removed from their field. These conversations are also a way for the teams to collect additional data on landmines and explosive devices present in the area. But the discussions also make us realize the immense suffering of the inhabitants, who beg the mine-clearing experts to come and take care of them.

The urgency to move forward to save more lives

As we come back to the center of the village, we meet a man who has just arrived home after two years of exodus. Grateful for the ongoing mine-clearing effort, he wants to offer his house as a rest area for the teams. One of the two local mayors who were notified of our visit has also come. He wants to thank us, to thank all the donors of the Brotherhood with Iraq, who made it possible for his children to live in a mine-free village. Next to him stands another man, quiet and dignified. Landmines killed his two sons in the village. We offer him our condolences; his only words are to invite us into his home to tell us how grateful he is that the mine-clearing effort has begun. 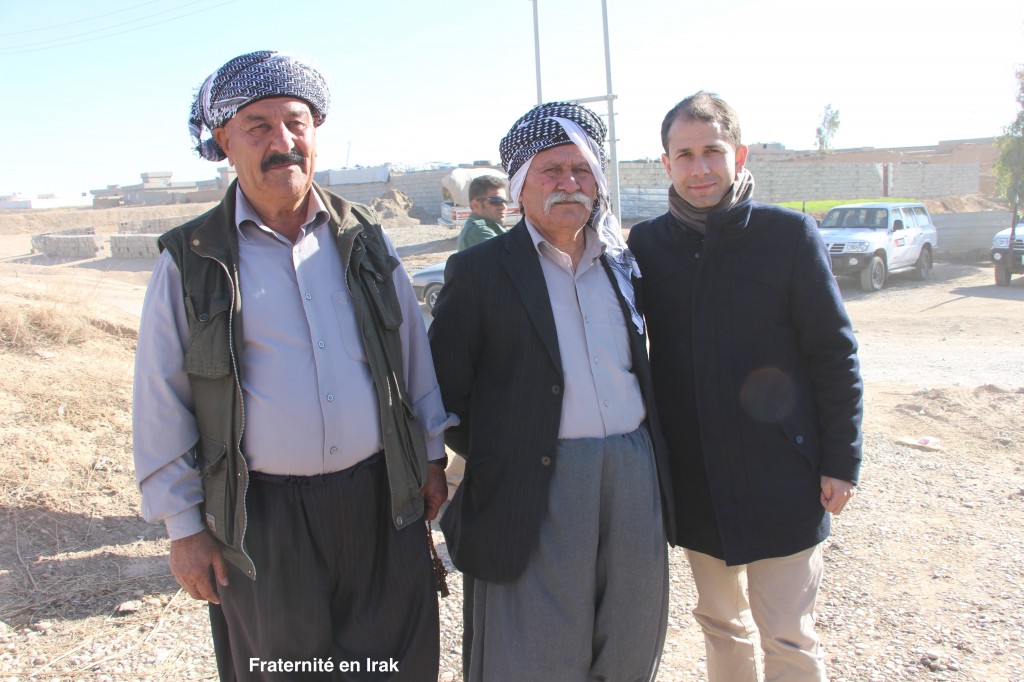 Faraj Benoit Camurat, President of Fraternity in Iraq, with the mayor of the Kakai village currently undergoing a mine-clearing operation

Before we leave, we ask the mine-clearing experts: “These two villages we’ve seen, why are they so trapped? Was there a tactical or military reasons?” Salam, the operation manager in the village, answers: “It’s true that the front line wasn’t far from here, but this village was mined because ISIS thought its inhabitants were infidels. We are in a Kakai village here, we have seen most of the rest of this zone and the villages belonging to minorities are far more trapped than the others. The big difference is that ISIS has set traps so that no one ever returns home.” 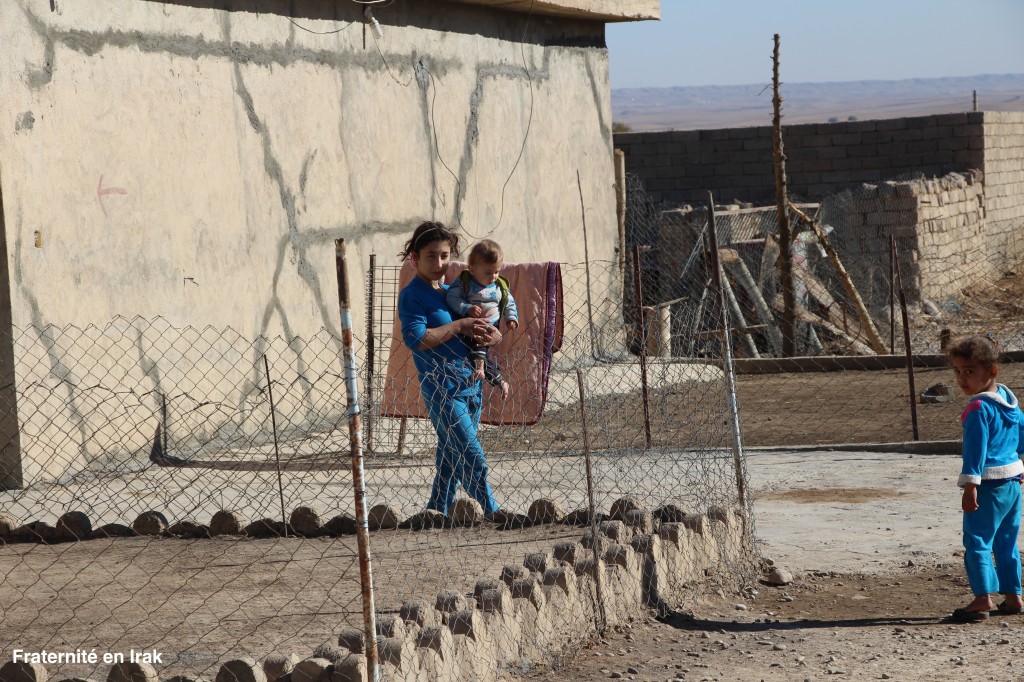 It will soon be possible to play safely, again