Rony, a new priest and a sign of hope for Christians in Iraq

PORTRAIT – Qaraqosh, the city where he grew up, is still occupied by ISIS. Rony was ordained priest on August 5, 2016, together with two other priests, for the Syriac Catholic diocese of Mossul and Qaraqosh – two years exactly after 120.000 Christians fled the Niniveh plain. He has been helping the volunteers of Fraternity in Iraq in Qaraqosh and in Erbil since the creation of the association in 2011, and he has become a friend. Here is his story.

Rony, 27 years old, grew up in a very religious family in Qaraqosh, the big Christian city in the Niniveh plain, about 20 miles from Mossul. Every day, they pray the rosary together and read a passage of the Scriptures. “Our family puts prayer at the center of our daily lives”, underlines Rony. The newly ordained priest remembers God’s call in his childhood. “When I was young, being a priest was a dream to me, there was something deep inside of me every time I attended mass.” The priest who was teaching him religious education told him he would become a priest after he finished his studies. Deep inside, Rony was already hoping it would become true.

He then started to study mathematics in Mossul, to become a teacher. Every day, he traveled 20 miles between Qaraqosh and Mossul to go to the university. After the fall of Saddam Hussein, the capital of the Niniveh province had become an unstable city that the Christian students reluctantly went to. In 2010, a tragic event hit them full on: the buses they used to take to go to Mossul were attacked, resulting in two casualties and 180 wounded. For Rony, who suffered injuries to his face and nearly saw his sister die in front of him, it was a click. He knocked at the seminary door. The bishop accepted, but asked that he finished his studies first.

The bus that transported the Qaraqosh students, destroyed by the bomb blast in the attack that targeted them on their way to Mossul in 2010. The bus is still in the courtyard of the Qaraqosh bishopric

The announcement was hard on his family. “When I left for the seminary, there was only one brother left at home. My mother told me I could have chosen to become a catechist to continue to serve the Church while being a teacher, but I wanted to see the Truth, the face of God, and serve my brothers. She said she would cry until I return…” Similarly, the first two years at the seminary weren’t easy. “I used to leave at 5 o’clock in the morning to continue my studies in mathematics in Mossul, then I would return to the seminary in the afternoon. The Church helped me a lot during this difficult time.”

That’s when Fraternity in Iraq met Rony for the first time. Each summer, from 2011 to 2013, he offered to be the interpreter-guide for the group of French volunteers coming to Qaraqosh to care for underprivileged children and carry different projects. 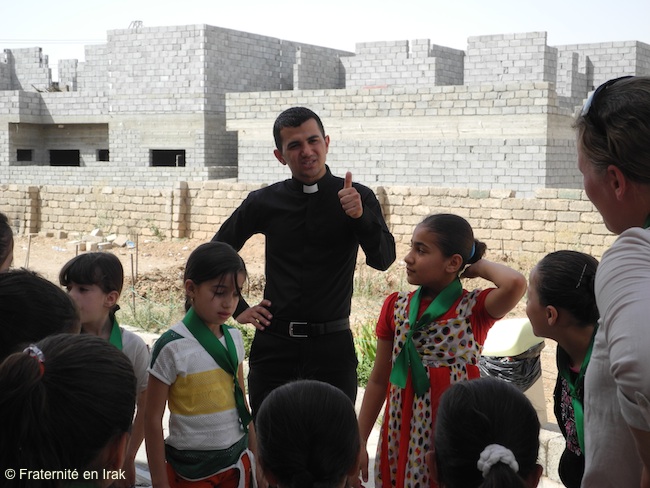 Rony with the children of the summer camp organized by the Brotherhood with Iraq in Qaraqosh, in August 2013.

In the night of August 6 to August 7, 2014, Rony’s life changed, together with the lives of thousands of inhabitants of Qaraqosh. ISIS had reached the city’s border. “The priests were telling us we wouldn’t leave. When the Peshmergas left at noon, the bishop said that we had to pray the rosary, that we could stay here. I was crying, then I started to pray, and hope that we could stay.”

Two hours later, the situation worsened; the Kurds who protected the city retreated, and the danger became imminent. “I was one of the last ones to leave. On the road, I cried a lot. I saw so many people leaving without anything, without a car, people in wheelchairs, people who cried.” Rony was convinced that the last thing that was left was prayer. “I asked Jesus and Marie: “where are you? The Christians love you and pray you”. We passed Karamless and we stopped: there were thousands of cars.” A little voice whispered to him “don’t worry”. “The others needed me to be strong. I started to smile. I saw it was giving them the strength to carry on. When we arrived at the Kalak check point, which marks the border of Iraqi Kurdistan, we were told we couldn’t continue by car. We finished our journey to Erbil on foot, the young carrying the old and the children, with only the belongings we could carry, without water nor anything to eat.” 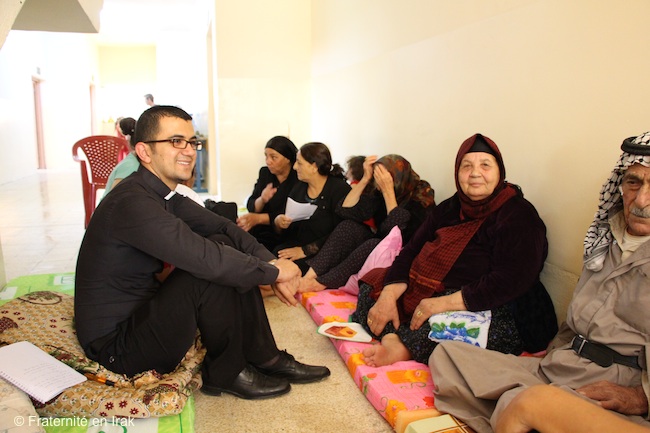 During the first move from the Niniveh plain, Rony tries to reassure displaced inhabitants.

Rony then joins the makeshift medical center installed in the tent campsite next to the Mart Schmouni church in Erbil, in the Ankawa neighborhood. Again, he experiences the power of prayer: “I used to visit people to see if they didn’t have any contagious illnesses, and despite having no equipment to protect myself, nothing ever happened to me.”

His mission as a young priest 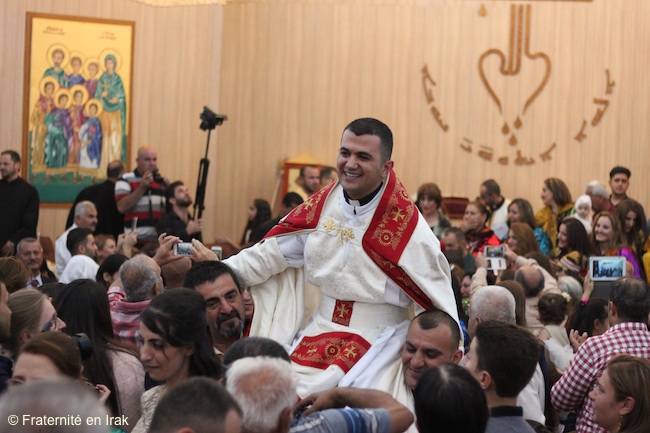 Rony will be priest for all the parishes connected to Mart Schmouni. “Our ordination will give strength to people, because they will see young people who have left everything but who carry a great peace. Our Church is alive! We are moved by a power that has nothing to do with human power.” 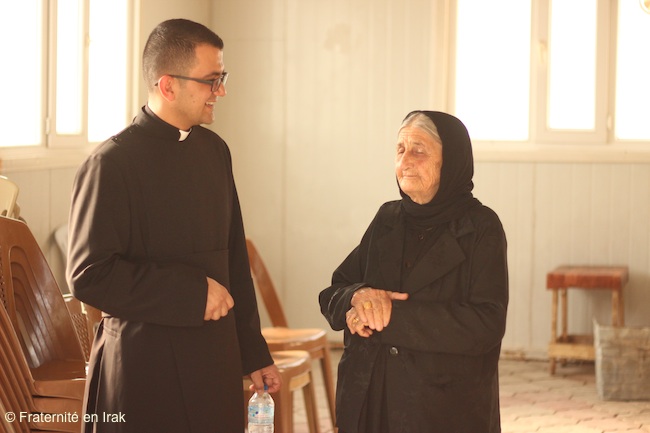 Before he leaves us, Rony insists on sending a message to the outside world. “You know, the Iraqi Christians were among the first ones to arrive in Iraq after St Thomas’ evangelization. For us to be able to stay in Iraq, there must be a call to the governments for them to create a peace zone. The Iraqi Christians really bring something to society. They have received a lot, they are very skilled people, many are teachers, doctors, they create schools. In Iraq, we have a very strong faith. Our churches are full.” 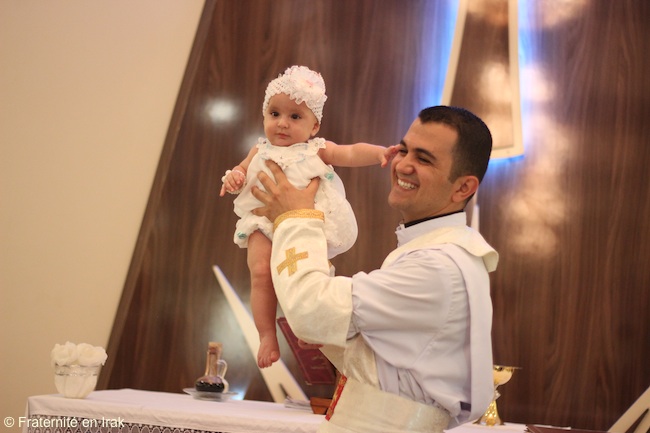 For Rony, a very special connection has been established with France. “I like French people because they visit us. Many pray for us, and we also pray for them. A true community of faith has grown. You have left your security, your peace to come in this country at war. You are crazy”, he says, smiling – “this encourages us to stay, even though a lot of families want to leave, two years is long…”